WASHINGTON – Sen. Chuck Grassley (R-Iowa) is once again pushing for answers and potential changes in the Defense Department’s approach to the Joint Enterprise Defense Infrastructure (JEDI) program.   In light of potentially burdensome litigation and rumors of rebidding, Grassley reiterated his longstanding concerns with the JEDI program’s contracting process in a […]

In light
of potentially burdensome litigation and rumors of rebidding, Grassley
reiterated his longstanding concerns with the JEDI program’s contracting
process in a letter to Secretary of Defense Lloyd Austin.

“As
public servants, it is of the utmost importance that we be good stewards of the
resources provided by the American people. That requires us to carefully
examine the apparent conflicts of interest regarding the JEDI program and take
actions to ensure that future negotiations follow all legal and ethical
standards,” Grassley wrote.

In his
letter, Grassley specifically highlighted some of the problems that have faced
the JEDI program, including allegations of conflicts of interest, politicization
and the potential violation of regulations and statutes. He highlighted the
different approach taken by the information security industry and the Central
Intelligence Agency in its acquisition of a similar cloud computing system, which
may prove better than the single-award contract undertaken by the Defense
Department.

Grassley
first wrote to Defense Department leadership in 2019, seeking
information on
department policies intended to mitigate conflicts of interest and prevent the
tailoring of procurement requests to match a specific vendor, as has been
alleged in the JEDI program procurement process. He continued to
press for information, particularly after the Defense Department’s Office of
Inspector General issued recommendations to the department following Grassley’s
inquiries.
Full
text of the letter to Austin follows or can be found HERE.

On April 28th of this year I sent you a letter
seeking information I originally requested from the Department of Defense
(Department) in January regarding the Joint Enterprise Defense Infrastructure
program (JEDI).[1]
I have not received a response. However, the day my letter was transmitted, the
Court of Federal Claims rendered another decision in the series of cases
regarding JEDI. [2]
Although that litigation continues, the Department had previously informed
Congress that if the government’s motion to dismiss in part failed, the
repercussions, particularly with regard to discovery, would be enormously
burdensome.[3]
Subsequent news articles suggest that the Department is considering redrafting
and resoliciting the JEDI contract, pointing to the court’s decision as one of
many factors.[4]
As you weigh the pros and cons of this decision, I wanted to highlight some of
my continuing concerns regarding the JEDI program.
As you know, the
JEDI solicitation envisioned an indefinite delivery/indefinite quantity (IDIQ) contract
to construct and maintain a Department-wide cloud-based computing system
capable of eventually holding the entirety of the Department’s classified and
unclassified data, as well as certain artificial intelligence (AI) programs.[5]
The Department consistently represented that a single awardee could receive up
to $10 billion over a ten-year performance period.[6]
From
the beginning, allegations arose that the JEDI contract was “tailored,” meaning
that it was written to advantage a preferred vendor, reportedly Amazon.[7]
Multiple Department officials with Amazon affiliations reportedly failed to
properly recuse themselves from this acquisition planning process, including,
among other things, deciding upon the single-award approach for JEDI in
violation of the Federal Acquisition Regulation (FAR) and numerous federal
statutes.[8]
As
I mentioned in previous letters, the Department’s Office of the Inspector
General (DoD OIG) completed an extraordinary report last year that reviewed the
JEDI program and some conflicts of interest allegations. In addition to
confirming allegations of impropriety in the formation and design of the JEDI
request for proposals [or RFP or solicitation], the IG found that Department
employees had “lied” to the Department regarding their relationship with
companies that were expected to bid on, or actively competing for, the JEDI
contract.[9]
Nor does it appear that Department officials cooperated fully with the IG’s
work.[10]

Further,
high-level political leadership reportedly were both inexperienced and overly
involved in the acquisition strategy for JEDI. Former Department officials
familiar with the program’s inner workings have reported to me that a “cloud of
uneasiness” hung over the acquisition process due to: 1) the pressure by
political leadership to accelerate the JEDI acquisition and 2) the failure of
political leadership to recognize their own lack of expertise in the government
contracting process and the department’s limited experience in the extremely technical
aspects of the cloud marketplace. These political appointees allegedly were
zealous to quickly acquire JEDI for the Department even though they did not
fully understand it.

Unfortunately,
DoD OIG has not fully reviewed the complete universe of allegations involving
the JEDI procurement. This has led to multiple court cases as well a sense in
the industry that an amicable resolution is unlikely.[11]
Public perception tees up a lose-lose scenario, in which an Amazon win would appear
to confirm that the contract was designed for them, while an Amazon loss would suggest
that the political deck was stacked against Amazon. Worse, the longer it takes
to settle these disputes the more out of date the contract requirements become,
resulting in the American warfighter receiving a less advanced product.
There
have now been three major bid protests since 2018 challenging different
elements of the JEDI contracting process. On August 8, 2018, Oracle filed a
pre-award bid protest with the Government Accountability Office (GAO) arguing
that JEDI’s single source structure violated Federal law, JEDI’s “gate”
criteria unduly restricted competition, and that JEDI was subject to conflicts
of interest related to the procurement.[12] On October 10, 2018, International
Business Machines (IBM) filed its own protest also challenging various aspects
of the JEDI procurement.[13] The
GAO denied Oracle’s protest on November 14, 2020, and IBM’s on December 11,
2018. Oracle then filed suit in the United States Court of Federal Claims,
which denied Oracle’s protest.[14]
The Court of Appeals for the Federal Circuit affirmed the decision,[15]
and Oracle has sought review by the United States Supreme Court.[16] On
November 22, 2019, following the Department’s award of JEDI to Microsoft,
Amazon filed its own protest in the Court of Federal Claims, based, in large
part, on allegations of political interference.[17] The Court of
Federal Claims denied motions to dismiss brought by the United States and
Microsoft.[18]
The
Department recently provided Congress a briefing paper asserting that this most
recent case, should it proceed, would impose significant and burdensome
discovery obligations on the Department. The case would require many senior
level Department officials as well as current and former White House officials
to testify or produce materials.[19]
The ongoing proceedings also would further delay the ever-extending timeline
for this project. In my October 5, 2020, letter I asked if the Department
considered it necessary to review the technical parameters of the contract due
to the procurement delays and the speed at which cloud computing is growing and
changing.[20]
Although the Department assured me that its existing parameters were adequate,
the industry’s actions seem to contradict this statement as, by and large, the
cloud computing industry has moved away from single vendor designs. Multiple
other federal agencies have followed suit.
Specifically,
in November 2020 the Central Intelligence Agency (CIA) awarded a cloud
computing contract to five separate providers: Amazon, Microsoft, Google,
Oracle, and IBM.[21]
This award worth “tens of billions” was created as a highly flexible vehicle
for cloud services; those in charge within the Intelligence Community (IC) can
select providers on the basis of the contractor’s ability to meet specific IT
needs.[22]
Essentially, the IC selects the best contractor for the job and is neither
hampered nor impeded by the inflexibilities often found in typical government
contracts. I believe the multi-vendor operation fosters an atmosphere of
competition, innovation, and flexible services. Further, it ensures that we
don’t put all of our national security eggs in one basket. This could be a win-win
solution for our warfighters, the Department, and the American taxpayer.

As
public servants, it is of the utmost importance that we be good stewards of the
resources provided by the American people. That requires us to carefully
examine the apparent conflicts of interest regarding the JEDI program and take
actions to ensure that future negotiations follow all legal and ethical
standards. That accountability also demands a balance between entering into
contracts that provide the most efficiency while also exercising fiscal
responsibility with taxpayer funds. So, before continuing in costly, drawn-out
disputes, I would encourage the Department to carefully analyze its options and
utilize a solution that will be reliable, adaptable, and profitable for the
Department’s widespread demands. Further, the questions I previously posed
remain unanswered and continue to linger over the JEDI program. I fear the
Department’s continued failure to provide forthright answers will continue to
erode public trust in its cloud computing goals. I look forward to your
expeditious reply. Thank you for your attention to this important matter.

Sat Jun 12 , 2021
Two Diy lovers have saved countless numbers on their aspiration lavatory following coming up with, sourcing and setting up almost everything on their own. See also: Toilet tips – 51 attractive appears to be, developments and guidelines to encourage a makeover Laura Crombie and her partner Rian, who reside in […] 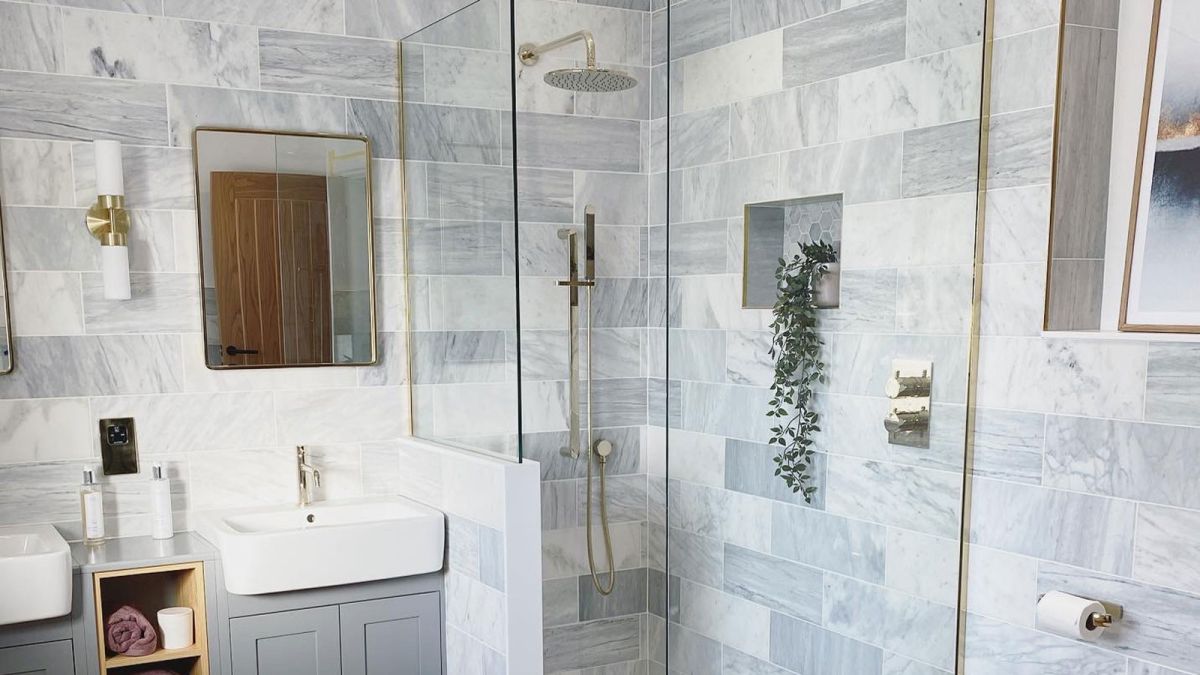